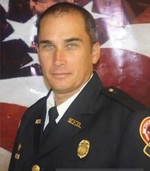 Benjamin William Gleaton, 48, of Lizella, passed away on April 6, 2021. The family will have a time of visitation on Thursday, April 8, 2021 from 6:00-8:00 p.m. at FairHaven Funeral Home. Funeral Services to celebrate his life will be held on Friday, April 9, 2021 at 12:00 noon at First Evangelical Church. Officiating will be Reverend Tim Long, Reverend Billy Lowe. Speakers will include, former fire chief; Mr. Jimmy Hartley, interim fire chief; Mr. Shane Edwards, retired battalion chief; Mr. Ronnie Napier, and deputy fire chief of Baldwin County; Mr. Phil Adams. Immediately following the service, Ben will be laid to rest in Glen Haven Memorial Gardens. For those unable to attend the services, they will be live streamed on Facebook at FairHaven Funeral Home Macon.
Ben was born on August 21, 1972 in Macon to Joe William and Rhonda Gail Gleaton. He had a true servant’s heart and proudly served the Macon-Bibb community as a Firefighter since 1996. He worked his way up through the ranks and most recently served as a Fire and Arson Investigator. In his free time, Ben enjoyed being outside, especially spending time with his wife and girls. He liked fishing, golfing, and riding Harleys. Ben never missed an opportunity to cook for friends at gatherings. He had a unique sense of humor and was the prankster of the family. His greatest joy in life came from his role as a son, husband, and father. He loved his family dearly.
Ben was preceded in death by his maternal grandfather; Edwin Purvis and paternal grandparents; William and Christine Gleaton.
Left to cherish his memory is his loving wife of 29 years; Sherry Gleaton. Daughters; Shelby Gleaton and Shaelyn Gleaton. Parents; Joe and Rhonda Gleaton. Brothers; Kenny Gleaton (Stephanie) and Daryn Gleaton (Michelle). Grandmother; Francis Ann Purvis. Mother-in-law; Sue F. Hinson, Sister-in-law; Sandy Price (Mike), Brother-in-law; Terry Neal Hinson (Elisa).
Friends may sign the online register at www.fairhavenmacon.com
FairHaven Funeral Home and Cremation Services has charge of arrangements.