To share your memory on the wall of Cheryl Payne, sign in using one of the following options:

Print
Margaret Cheryl Roby Payne died peacefully in her sleep Sunday morning at her home in Lizella, Ga., surrounded by her family. She was 72.

Born Margaret Cheryl Roby in Macon, Ga. on July 2, 1948, she was the second and youngest daughter o... Read More
Margaret Cheryl Roby Payne died peacefully in her sleep Sunday morning at her home in Lizella, Ga., surrounded by her family. She was 72.

Born Margaret Cheryl Roby in Macon, Ga. on July 2, 1948, she was the second and youngest daughter of Margaret Elizabeth Douglas, of Columbia, Ala., and Robert Gilbert Roby, of Portage, Penn. She was the stepdaughter of Joshua Forrest Campbell, of Perulack, Penn. She grew up on Pine Street, Sherbrooke Court and Vineville Ave. in Macon. She attended A.L. Miller High School for Girls, and was a 1966 graduate of Dudley M. Hughes High School. While still in high school, she married Ira Stanley Brown, of Macon, with whom she had Andrew Douglas Brown and Amy Lynn Brown. She was later married to Ralph Payne, Jr., of Knoxville, Tenn., with whom she had Amanda Nicole Payne and was the stepmother to James Andrew Payne, Michael Sean Payne and Mark Alan Payne.

Known for her athleticism, Cheryl took up tennis and jogging in her early 30s and golf when she was nearly 40. She and Ralph were members of River North Country Club, where she was named most improved golfer in 1986 and 1987. Cheryl scored a hole-in-one in October, 1995, a second one that November and a double-eagle the same year, cementing her reputation as one of the best female golfers in the club’s history.

Funeral arrangements will be private, and the family and has asked that donations be made to the Alzheimer’s Association in lieu of flowers.
Read Less

Receive notifications about information and event scheduling for Cheryl

There are no events scheduled. You can still show your support by sending flowers directly to the family, or planting a memorial tree in memory of Cheryl Payne (Roby).
Plant a Tree

We encourage you to share your most beloved memories of Cheryl here, so that the family and other loved ones can always see it. You can upload cherished photographs, or share your favorite stories, and can even comment on those shared by others.

Plant a Tree in Memory of Cheryl
Plant a tree 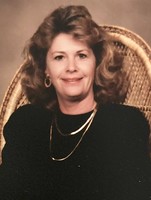