To share your memory on the wall of Donald Holley, sign in using one of the following options:

To plant a memorial tree in honor of Donald Holley, please visit our Heartfelt Sympathies Store.

Receive notifications about information and event scheduling for Donald

There are no events scheduled. You can still show your support by sending flowers directly to the family, or planting a memorial tree in memory of Donald Holley.
Plant a Tree

We encourage you to share your most beloved memories of Donald here, so that the family and other loved ones can always see it. You can upload cherished photographs, or share your favorite stories, and can even comment on those shared by others.

Posted Mar 15, 2021 at 09:40pm
So shocked and saddened to hear of Dons passing. I’ve known and worked with Don for over 30 years in the pool business and he was one of the finest men I’ve ever known. Even though I never meet his wife, he always spoke of her and quite obviously loved her very much. My thoughts and prayers go out to his family and friends. I know he had many that will miss him. RIP my friend!!
Comment Share
Share via:
JT

Posted Mar 12, 2021 at 07:53pm
We just heard today that d-Don had passed. He was such a wonderful person, always patient with us and doing all he could to keep our pool in the best shape. We are so very sorry for your loss and know you are so sad. May you receive peace and comfort in the coming days.
Comment Share
Share via:
D

May Our Heavenly Father continue to comfort and console your hearts and mind.

Posted Mar 08, 2021 at 07:07pm
I am so sorry for the loss of this kind soul. He sold me my gas logs about 12 years ago and came out and did the service on them. He always loved to see my little Zoe (dog). When Mr Don would get in the floor to work on the fireplace Zoe would want to get in his lap. He was such a kind person. I am really sad to learn of his passing.
Nita Ard
Comment Share
Share via:
WW

Posted Mar 06, 2021 at 06:40am
Pat,
I am sooo sorry for your loss. How blessed you have been to have had such a wonderful man to share your life with for 50 years. You and your family are in my thoughts and prayers. May God give you strength and peace and joy until you see Don again in heaven.
Comment Share
Share via: 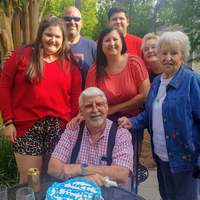