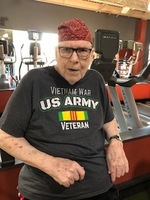 Edward was born in Seminole, Florida on January 9, 1937. He passed away on April 25, 2021 in Macon, Georgia at the age of 84.
He was preceded in death by his wife of 57 years, Barbara Jean, his sister, Jenny, his brother, Nathan, and his sister, Earlene. He leaves behind his daughter, Jean Kathryn, his son, James & Cindy, his brother Bob, his brother, Frank & Shou-ling, his sister, Lunda, his sister in law, Martha, along with several nieces & nephews.
Edward was a retired US Army master sgt. He was a proud Vietnam veteran. After 20 years of service in the military, he held several different jobs. His favorites included being a tax preparer for H&R Block and various jobs working with computers.
He became a gym rat at the age of 50. His first personal trainer was Otis Sistrunk. He competed in bench pressing contests in his 60’s. His best was 350lbs. He continued to work out at the gym until the age of 83 when his body just could not do it anymore.
He will be missed, but blessedly he is no longer suffering.

FairHaven Funeral Home and Cremation Services has charge of arrangements.