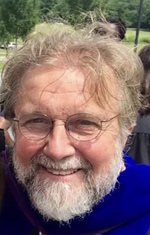 On Saturday, March 6, 2021, Patrick Calvin Pritchard, passed away in his sleep at the age of 70 at his home in Macon, Georgia. Born to Edna and Bill Pritchard on April 3, 1950, he grew up on the southside of San Antonio. He was proud of his parents and indeed of his whole family. A great storyteller, he loved to tell family stories such as his father’s experiences as a soldier in France during the first World War, and how his mother came to own one of the most well known art galleries in Houston and San Antonio during the 1970’s and 80’s. He had a wonderful collection of photographs of his ancestors and enjoyed talking family history with his two older sisters, June and Brenda.

He was a passionate and perpetually curious person who loved knowledge and education. He was an inveterate and incorrigible educator, equally at home with children in a first grade classroom, a graduate class in education or a community group learning a new practical skill. So while his formal education and career included a BA from Eastern Mennonite University, a PhD from Clemson University, and twenty years as a professor of education at Wesleyan College, this belies the unconventional life he led. Religious for much of his early adult life, Patrick was a member of various Anabaptist communities throughout the country, living and working towards his eventual vocation as an educator, but if one wanted to identify the thread that ran through his work as a carpenter, farmer, fourth grade teacher, outdoor educator and academic, it would be the unique way he manifested and knit together his love for people, nature and the world. Patrick lived deeply in the world. He cared wholeheartedly for the relationships in his life. So many things made Patrick happy: His children, grandchildren and friends; planning and carrying out long distance walks in England; cooking his famous cowboy cornbread from the glass gem corn he grew and ground; and working with his wife, Lesley, in the garden imagining new vistas and reveling in the ones surrounding him. He found beauty in the smallest of details. He loved gathering friends together for events such as spoken word and music evenings, and the annual scuppernong squeeze when the grapes in his garden would be harvested, pressed, and the juice drunk. An avid guitar player, he delighted in playing and singing with friends. Home brewing was one of Patrick's great joys, and he relished time spent crafting and concocting recipes, but even more so, sharing his brews with friends in his beautiful garden. He drew new people into his circle and was always looking to introduce people he thought might enjoy each other. He was a community builder through and through, working to support many local institutions and organizations including Storytellers of Macon, Woodfield Academy and the Wesleyan College Arboretum.

Patrick is preceded in death by his parents and sister, Pamela. He is survived by his wife Lesley, with whom he lived happily for 20 years, his sisters, June Pritchard and Brenda Duncan, his five children and their spouses, Andrew and Anna Wilds-Pritchard, Mary and Justin Pearson, Jordan Pritchard and Jennifer Pritchard, Justin Pritchard, and Sean Pritchard and Emma Furman, his first wife, Heather Pritchard, and three grandchildren, Rhys Pearson, and Hunter and Hartz Pritchard, along with nieces, nephews and cousins. He is mourned by many here and in England, his second home where he has a close loving community of family and friends.

Patrick had a light that he shared freely, and a kindness that drew people to him: He loved without thought of the love he engendered.

If you are interested in planting a tree the family would like you to donate to the arboretum at Wesleyan College Macon Ga rather than clicking on the link above.

FairHaven Funeral Home and Cremation Services has charge of arrangements.